Hi, MCA readers! Thank you for joining us for another installment of our interview series. For this interview, we had the pleasure of speaking with Sean O’Reilly, the author of the MCA award-winning book, Randolph the Reindeer! Randolph the Reindeer is a fun and engaging Christmas tale that gives anyone who reads it a little cheer, something much needed in these uncertain times. Keep reading to hear more about Randolph the Reindeer and its author Sean!

MCA: Hi Sean! First, I want to congratulate you on your Mom’s Choice Award for Randolph the Reindeer! Randolph the Reindeer is an uplifting story that is a perfect read for this holiday season. Can we start off this interview by finding out a little bit about yourself? 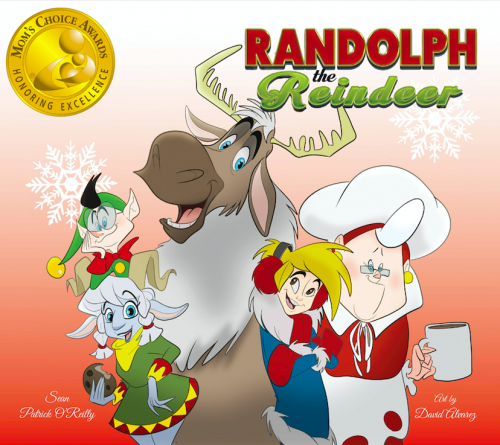 Sean: I was a science nerd receiving my B.Sc. in Biology from Simon Fraser University, my second degree in Education at the University of British Columbia, and my M.Sc. in Leadership and Administration at the University of Oregon. With my Doctorate in Management Information Services and Technology, I guest-lectured at Harvard, USC, UBC, SFU, and also designed a transmedia course for the UCLA Screenwriters program. In 2008 I won the Top 40 Under 40 award from the city of Vancouver, and in 2011 won Caldwell’s Top 40 Under 40 across Canada and Playback’s Top 10 to Watch.

All of this was happening while I pursued my passion for writing comics published by Simon & Shuster, Harper Collins, Random House, Stone Arch Books, Scholastic, Mattel’s American Girl, the 1000 page KISS Kompendium and of course, Arcana. I have won numerous awards including the Moonbeam Award for Top Children’s Graphic Novel, the Mom’s Choice Award, and Foreword Magazine’s Top Graphic Novel as presented at Book Expo America. Arcana has published over 300 graphic novels, then moved into animation production and recently has been producing live-action features.

As for hobbies, I love hockey. Pre-COVID I was playing on four teams a year, two in winter and two in summer but unfortunately for me, that’s been shut down. Outside of Arcana, in comics, I love Spider-Man and X-Men, and the MCU movies. I can also always watch any episode of SpongeBob SquarePants or Rick & Morty. Recently I bought a 20’ canoe we use with our family on the nearby lake and that’s been a blast.

MCA: You are certainly well-educated! Your company Arcana sounds like it has been quite successful as well. Can you tell us more about Arcana and how it got started?

Sean: Launched in 2004, Arcana is an award-winning entertainment company. We produce engaging stories and with compelling visuals. Arcana first began as a publisher and we are now an innovative leader in the development of intellectual properties across all platforms. Arcana’s library of wholly-owned intellectual properties contains well over 5,000 characters that transcend gender, age, and cultural and geographic boundaries. We actually own one of the world’s largest libraries of graphic novels. In 2012, Arcana opened an animation division to develop and produce its content for all platforms including film, television, direct-to-home, and digital media. This extension of our comic book characters has provided new merchandising vehicles across all retail product lines. Arcana Studio is a true “farm to fork” studio, as we create our own IP, finance it, produce and animate it, and then sell it all through the incredible Arcana team. I like to call ourselves a true studio, in the true “1920’s sense of the word”.

MCA: From the sound of it, I would say you have yourself a true studio indeed! You mentioned pursuing your passion for writing comics, can you elaborate more on what that journey was like for you?

Sean: I realized my dream of becoming a writer by writing Kade, my first comic book series in 2004. I wrote comic books for about five years when I got a chance to write two movies for Lionsgate (Circle of Pain and Beatdown). After that game-changing experience, I wrote and produced the animated film The Clockwork Girl and The Mighty Mighty Monsters series. My career then led to directing and producing a thirteen-episode season for the animated TV series Kagagi. I found that my passion and calling is when I write, direct, and produce, and have done so with the animated feature films Pixies, Howard Lovecraft & the Frozen Kingdom, Howard Lovecraft & The Undersea Kingdom, Howard Lovecraft & the Kingdom of Madness, Panda vs Aliens, The Steam Engines of Oz and Go Fish. I am currently writing, directing, and producing a Go Fish series, Miskatonic series, My Brother the Monster series as well as the animated feature films Ultraduck and Heroes of the Golden Masks. I’ve been able to continue my passion for storytelling by writing, directing, and producing in Arcana’s features and series.

MCA: Writing, directing, and producing, you’re a triple threat! What was your path to becoming an illustrator like? 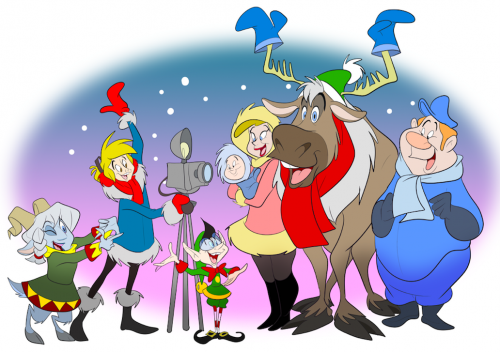 An Illustration from Randolph the Reindeer

Sean: I loved to draw as a kid and pursued it up until my early 20’s. To be honest, I started to study other people’s art and quickly lost confidence in my own, unfortunately leaving art. I still do a doodle here and there, but I have so much respect for a commercial artist. There are a lot of talented people who can do an incredible sketch at the back of a classroom, but to wake up every morning and produce art, day in and day out, fighting through fatigue and lack of inspiration, is something I really admire. To be a true commercial artist earning a living as a full-time illustrator, it requires such focus and dedication. While I don’t illustrate anywhere near as much anymore, I love working with our team of artists in animation because it has no creative constraints. We have full control over the entire process of producing film and television content. We know we are very fortunate as our team is the art director as opposed to a ‘work for hire’ studio where we face a client and revisions.

MCA: I find that you can really put your heart and soul into something when you are not limited by creative constraints. What was your inspiration for writing and illustrating Randolph the Reindeer?

Sean: The classic story has the ‘other reindeer’ who was asked to guide the sleigh, the reindeers loved him and shouted out with glee as he saved Christmas. But there’s only one winner. Randolph did not win. Randolph is a loser. And that’s okay, as statistically most of us have to “lose” to the first place winner. Randolph is a tale of redemption where someone can find their personal win years later. Maybe it’s inspired a bit by the themes Rocky touched on.

MCA: What are some of the key lessons found in Randolph the Reindeer?


Sean: Randolph the Reindeer has so many wonderful lessons for the reader. One of the big ones is that the story reinforces that it’s the people in your life that matter, not the things. This is such an important lesson, especially around Christmas. It’s easy to get caught up in the materialistic aspects of the holiday, but when it comes down to it, friends and family are what count. Another critical message in the book is to persevere and never give up on your dreams, which we see through Randolph. He works hard and is able to fulfill his life-long dream, all while saving Christmas for his loved ones.

MCA: Sounds like an ideal read for the holidays. What has the feedback from readers of Randolph the Reindeer been like?

Sean: We have had an overwhelming response from readers. I feel so lucky to be able to share our library and projects with children and families. Randolph the Reindeer is truly a book for all generations because of the story and themes in it.

MCA: What would be one message you would like readers of Randolph the Reindeer to walk away with?

Hope. I want our readers to follow their dreams and if the dream doesn’t happen, do not give up. Keep pursuing one’s passion and dreams. I really believe if a person does what makes them happy, there will be success. Maybe it’s not a global “saving Christmas” level of success, but a success that can feel amazing. Making a difference, even a small difference for just one person is a critical lesson in today’s world.

MCA: That most certainly is a crucial lesson in today’s world, thank you for sharing with us. We hope to hear more from you soon!

You can learn more about Sean O’Reilly and his award-winning book, Randolph the Reindeer by visiting his MCA Shop pages.