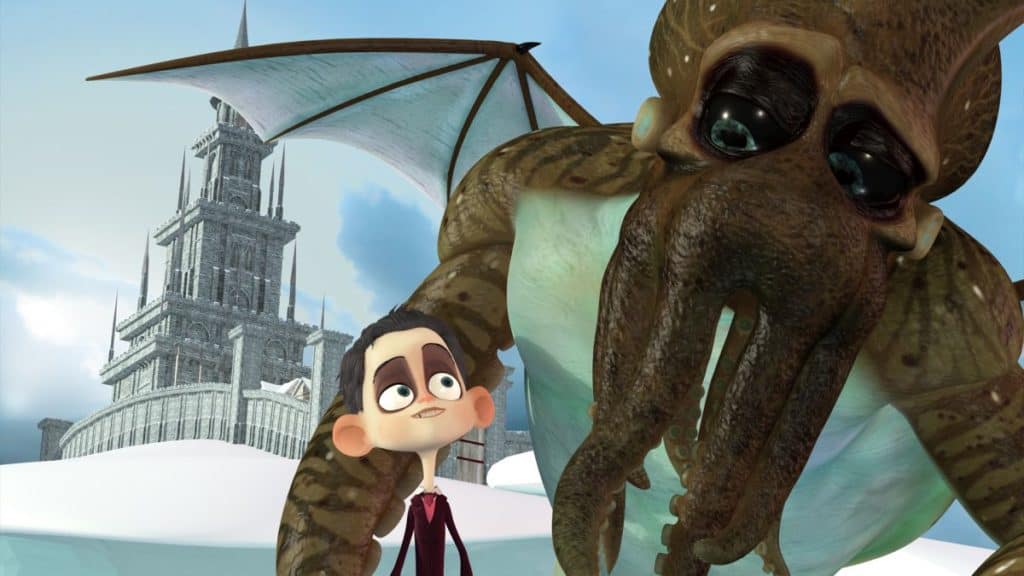 Sean Patrick O’Reilly is a creative force of nature. As the CEO and Founder of Arcana, O’Reilly has helped write, foster, and release hundreds of inventive, unique stories out into the world. Ostensibly a comic book distributor, Arcana is also a rising Canadian animation studio with a wealth of feature films under its belt. Perhaps best known to horror fans for his HOWARD LOVECRAFT trilogy of films, O’Reilly writes, directs, and even lends his own vocal talents to the series adapted from Bruce Brown’s comic books. Rue Morgue had the pleasure of catching up with O’Reilly, chatting all about the trilogy, seeking the voice talents of horror icons, and which Lovecraft adaptation he’s dying to see realized.

Your company Arcana has been releasing comics since 2004 and animated features since 2012. Tell us a little bit about your journey and how you got here.

It all started in 2002 when I went to San Diego Comic-Con. It was my first one and it was a bit crazy! It was a lot bigger than I had anticipated, but I was able to buy tickets on-site. There was no lottery back then. You’d just show up and buy a ticket at the door. Then, in 2004, I published my very own comic book called Kade which was about a gothic demon hunter. It did ok, did alright. It got the money back and kind of broke even. Then I did the second one and the third one. And then we tried a new series called Ant, which did really well for us. To this day, if you look on eBay you can buy copies of Ant #1, a regular $3 comic book, for $80 or something which was kind of weird.

Since then, we’ve published 300 graphic novels, and right now we’re doing about 6 a year.  There was a point where I was doing 20-24 a year, probably even more. That was a bit crazy, but we got through it. Our goal is always to establish new properties, create new titles and new stories. [I ended up] in LA, which is where I published Cowboys & Aliens, which went platinum. I learned a lot from that – what to do and what not to do, and I took those experiences and went back to my home in Vancouver. There, we started up the animation and have been just going from there! When it comes to taking a comic-book story from the page to the animated screen, what are some of the unique challenges transitioning one format to another? Are they at all similar?

Sometimes to understand the differences you need to understand the similarities. So, I think for me, the similarities are very similar. In terms of the idea, the script, the character designs, and the layout. The comic book layout is very similar to storyboards. You start with a sketch, and you refine, refine, refine. Animation is truly nothing but refinement. You keep changing, keep doing your thing. And then it’s kind of cool, once you do your pencils you do your inks which you could call your animation process, you send it to a colorist. That process is called the LRC in an animation pipeline, which stands for Lighting, Rendering, and Compositing. So, [there are some] definite similarities to the creative process and workflow, but, for me, that’s where [they] end.

The biggest difference, to be brutally honest, is money. The amount of money for animation versus comic books is probably a factor, and I don’t say this lightly, a factor of 10,000 times or more. You can check my math on that, but I think it’s more. Comic books, the coolest part (and some people know this), is that you’re considered a “cartoonist” if you’re the writer and artist. Whether it looks like a cartoon or not. It could look like manga or anything really, but you’re called a cartoonist. That process, theoretically, takes one person. And animation, I don’t think pragmatically can. So, with animation, you’re usually working with a team of dozens, even hundreds and obviously the budget is different. The other part is the experience level. Jokingly, in-house we say we “fight with the machine,” because Maya is a notoriously buggy program. Even when they release new versions it breaks stuff backwards or changes stuff forwards. Maya is always one you’re grappling with, but I’ll tell ya, the technology barrier, the collaboration with two, three, or more people, and the money are kinda the biggest ones.

Your studio has released a trilogy of films based on the HOWARD LOVECRAFT series. How did this project evolve?

The creator, Bruce Brown called me up and was like, ‘Sean, I have a great idea for a book!’ And my philosophy, to be honest, has kind of changed since then. I believed in the “Million Dollar Idea” back then. If you’re the creator of one great idea, you can go from zero to hero really quickly. However, sometimes it’s better to have an idea with a million dollars behind it. But back then, he pitched me H.P. Lovecraft for kids. And I thought, ‘Oh that’s cool. I dig it.’ In concept, I liked it. So we kicked around the tire a little bit and it was going to be H.P. before he was H.P. He was Howard, just Howard. And all the stuff he would write about in his adult life, he actually experienced as a kid. So we published the first book around 2009, Howard Lovecraft and the Frozen Kingdom, then the second book, Howard Lovecraft and the Undersea Kingdom, and the last book was Howard Lovecraft and the Kingdom of Madness. About every 2 years we were releasing a book – slow and steady. We then combined them for a hardcover edition called Howard Lovecraft and the Three Kingdoms which we did as a Kickstarter. That was my first introduction to Kickstarter and it’s so much work it’s crazy.

From that point, I did a short film. I’ve found that before you can sell an animated feature film people always ask, “What’s it going to look like?” First question. It’s really, really hard to sell that animated feature if you don’t have a proof of concept. So, I did it as cheap as humanly possible. It was one location, one set, one prop, Howard sitting in a chair, and slowly [from] behind him comes the Cthulhu. I really drew it out for about 40 seconds, but it showed great animation, great characters and it had great music. Using that along with the screenplay and the book, we did a three-picture deal with Shout Factory. We did Frozen Kingdom and they were happy as the initial footage came in. They also liked our cast, which was amazing, and then they basically greenlit the other two after that. We then went into production for about 4 years off that series.

These films have a really impressive roster of vocal talents including Christopher Plummer, Doug Bradley, Mark Hamill, Ron Perlman, and yourself, plus, a few members of your own family, which is adorable. What was it like working with some of these icons and what was the casting process like?

On the first one, in the book, while we never actually say [Howard’s] age, he’s about 7 years old. It just so happened my son was into acting, and he was about 7 at the time. So, I put him in and we did what is called a “scratch recording.” It’s the same as a table read, you just kind of get whoever and read the script. I recorded my son for scratch and then submitted it to Shout Factory, and as the project just kept developing, my son, by default became Howard. However, I did need some stars for the cast. For me, Christopher Plummer is awesome. He was in my first movie, Pixies, so I went back to him a second time and said, “Please will you do this?” And he said yes! Once you have someone like him, someone who’s won the Oscar, who is an actor’s actor, who’s a craftsman, boy is it easy to start casting up! After that, we got Ron Perlman as the Shoggoth which is a massive demon. So, we had Hellboy playing a demon, which was amazing. And the amazing Jane Curtain from Saturday Night Live. That kind of rounded out our cast in the first one. Doug Bradley from Hellraiser was Nyarlathotep in the first as well.  I think he had two lines, and then as the trilogy goes on, his character grows, as does Doug Bradley’s presence. I love how you have Jeffrey Combs involved as well. The whole Re-Animator tie-in made me really happy.

It was funny, because originally I talked to Jeffrey about what his role was going to be, and he and his manager were quite adamant that he not do Herbert West. They were like, ‘We love Lovecraft, but he can’t be Herbert West.’ And that was ok with me, it was fine. So we were really lucky to get him. And then Mark Hamill came in for the second and third one as Dr. Henry Armitage, the chief librarian of Miskatonic University, and then we got Finn Wolfhard from Stranger Things as Herbert West for the third one!

Whenever discussing Lovecraft, I think it’s important to address his problematic past in regards to his racist and xenophobic beliefs. Was this ever something you struggled with or discussed on these productions, especially considering the younger target audience?

It was something…I don’t know if you’ve seen any of the South Park Lovecraft episodes, but they push it to an 11. So I think that was something that really started bringing everything to the forefront. We knew about it, but I didn’t necessarily know about it when initially going into the project. In the end, we had made our own Necronomicon where we created a huge, 500 page, leather-bound, wood, and metal book. We’ve done a ton of research, but that’s definitely one of the darker, more nerve-racking areas when you see it. It’s one of those things that for us, I almost didn’t push anywhere into that area.

You don’t want to turn a blind eye to those types of things, but being knee-deep in a project like this and to address something like that with the social weight that it deserves, it would almost need to be its own project. I haven’t seen Lovecraft Country yet, but sooner or later someone is going to have to address this. I’m not sure if they do or not. As a result, we basically left it out from a narrative, from a creative point of view. I mean, it’s a 7-year-old kid in our story, so I don’t think he’s necessarily there yet.  We’re on a budget where we’re doing the best we can, we’re very passionate about it, but it was like, oh boy, that’s a whole other can of worms to explore. I have enough plates spinning right now.