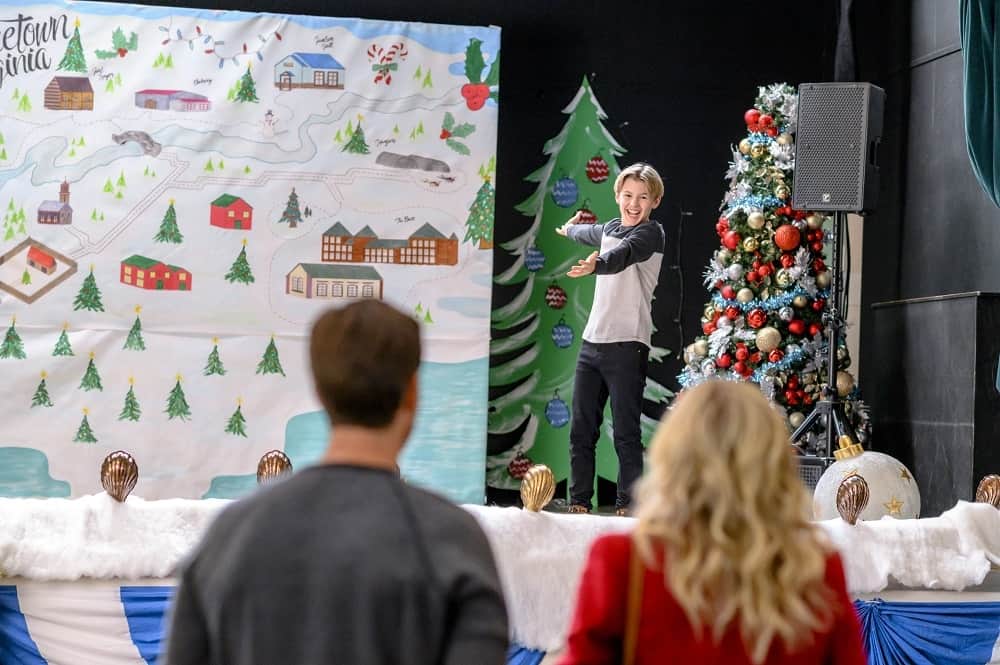 A few years ago, I was given the fabulous opportunity of interviewing a promising young man in the Vancouver film community, Kiefer O’Reilly. Thankfully, I was already familiar with his work on a couple of high-profile Hallmark projects, and it was a delight to connect with both him and his mom. (I actually met them both at the only awards show I have had the pleasure of attending, the Joey Awards.) Recently, Kiefer’s star is on the rise again due to a few highly-publicized roles as well as an awards nomination, and I am honored to share our most recent interview with all my readers today.

RH: Kiefer, it’s so great to chat with you again. How are you doing during this time?

KO: Thanks for having me, Ruth. Not too bad. I can’t complain. I’m healthy and safe.

That’s the right attitude. What year in school have you just completed?

Was online school a transition for you?

I understand. My daughter just finished grade eleven and it was a transition for her too. It’s not ideal, but it’s all about making the best of things.

It’s been so long since we last chatted, Kiefer! I still remember our first interview and meeting you and your mom at the Joey Awards. It’s been fun to follow your career. I understand you were recently nominated for a Leo Award.

Yeah, for The Good Doctor.

That was a really good episode.

Thank you very much.

It was something to see how you had grown up since I had last really seen you. Fingers crossed that you win.

Yeah, it would be great. We’ll see what happens.

You have been involved in several things over the past year or so. I haven’t seen Twilight Zone yet or Home Before Dark. In fact, there’s a lot of kids in Home Before Dark, isn’t there?

Yeah, it was fun. It was really like just hanging out with all of your friends on set, almost like being a school. We had a blast.

So there’s ten episodes in that series, and you’re in eight of them, according to what I’m reading.

Yes, that’s right. I’m in eight of them.

Didn’t this series drop early or all the episodes dropped at once or something like that?

Yes, Home Before Dark is on Apple TV, and originally, they were going to release it week-by-week. But since everyone is in self-isolation, they put all the episodes out there all at once.

That’s right! I couldn’t remember exactly. So what can you tell us about your character in Home Before Dark?

I play Young Richie Fife. I’m the mayor’s son. I don’t want to give away the whole story, but I’m on a bike ride with two other friends and I get kidnaped. For the past four years, no one knows where I’ve been. But then they find out that my dad has been keeping me and feeding me. So someone was trying to get me and put me in a better place. The show is based on an actual case. So my character thought he was being kidnaped, but they were actually putting me in some sort of house or daycare or something like that. But I’m not going to say anymore. You have to watch it to find out!

Since there were so many kids, did you get to work with any of your friends on this series?

Yeah, there’s Dean Petriw, who’s lots of fun. There was Nicholas Holmes, Brooklyn Prince, Deric McCabe…everyone was so fun to work with on that show. We’re all friends and still talk.

I think that’s great, Kiefer. I definitely know some of these kids and others in the cast as a whole. It sounds like a great show to watch if someone is looking for new content and hasn’t seen this yet.

Oh yeah, that one was really fun to shoot. Again, everyone on every show was so great to work with. But Alison {Sweeney} was so fun to work with. Before working with her, my experience had been as a Vancouver-based actor, and I hadn’t had the opportunity to expand much past that. But Alison taught me the ropes of things and how to deal with things in the industry. It was really cool.

And you two had a great relationship on camera. You two played really well off of each other. It was lots of fun to watch. I saw everybody remarking about how much they loved the relationship you two had. Some people didn’t recognize you and wondered who you were because you had grown up so much from when they last saw you. You were very believable as her son. And this year, Hallmark has been replaying a lot of their Christmas movies, and now we’re in the midst of Christmas in July programming, so we are getting to see our favorite Christmas movies again. This movie is amongst those.

Now back to The Good Doctor. First of all, were you a fan of the show before landing this guest star role?

I hadn’t really been watching the show, but I heard that is was great and that it was a funny, interesting show, and I was truly excited just to get the audition, let alone book it.

{laughs} That one was really fun!! Everyone was so much fun to work with. They were funny and so nice. Every episode, they have guest stars working on the show, and they make it a point to introduce themselves to the guest stars and make them feel welcome and comfortable. They do a great job with that.

That’s so good to hear. One of the main stars you worked with was Fiona Gubelmann. You shared a lot of scenes with her. She’s done a lot of Hallmark, and she’s also a part of the regular cast on The Good Doctor. I’ve heard she’s lots of fun to work with.

I can imagine. Did you get to share any scenes with Freddie Highmore?

We didn’t have a scene together, but we did cross paths when we were shooting.

I know people always rave about him, and he just amazes me. He blows me away on that show.

You also have some things in production, right? I know it’s crazy right now as some things are just starting to open back up.

Well, I can say this. Before the industry shut down, I was working on a Disney Plus TV show called The Mighty Ducks. It’s based on the ’90s film. It kind of a follow-along story. It has different characters, but it’s set in the same world. We had just shot the pilot when everything shut down. We were going to go back and film the rest of the episodes until this whole thing happened.

I know there are lots of stories like that, but hopefully, with things opening up in Vancouver, you guys can go back soon. I’ve heard the buzz about this show.

We were shooting this in Vancouver, about an hour away from my house. It was reasonably easy to get there. We’re hoping to come back and resume shooting this month or maybe next month. We’ll see.

Well, let’s hope things really do open up soon for you. I do see several things listed in your credits over the past couple years. I notice you’ve got a couple of animated things listed. Is there someplace they can check out Howard Lovecraft and some of these other projects?

Yeah, you should be able to find DVD’s of those movies. They should be pretty easy to find.

That all sounds fantastic. Well, good luck with your Leo Nomination, Kiefer. Your character was quite memorable. It was so well done and relatable.

The writers on that show are amazing. They hit the right tones and the right age. Everything is perfect.

I truly cannot envision a more deserving, talented, humble young man than Kiefer in the world of film and TV today. From the beginning, I remember always being impressed with him because he seemed to be mature beyond his years, and I believe that the principles with which his parents have endowed him in addition to his general outlook in life and in the industry have all served him well. As he enters one of the more challenging segments of childhood (puberty/preteen), I am certain he will continue to be cast regularly in diverse roles that demonstrate his talent and vitality. Furthermore, in my opinion, give him a few more years, and he will easily jump in as the supporting lead and eventually the leading man, if that is what he so desires. I wish him every success in the world as we wait to see if he wins a Leo Award this year or not, and I know he can hardly wait to get back to set and resume filming. Nevertheless, as we await his next venture, be sure that you visit his links below and consider following him where applicable and possibly even looking up some of his past and/or current works. I am honored to know that he still remembers the person who gave him his first interview (yes, that was me!!), and it thrills me to no end to watch the steady progression of his career now as well as into the weeks, months and years to come! More than anything else, it is my sincere desire that everyone will applaud his successes and unequivocally support him every step of the way since he is irrefutably our future!!